Contrabrand tobacco is a $1bn trade in north Africa, run by extremists including Mokhtar Belmokhtar, who masterminded the attack on the Algerian gas plant. The trade is highly profitable – and very low risk

For many years Mokhtar Belmokhtar was little more than a footnote in the intelligence reports analysing the increasingly muscular presence of Islamist groups in Saharan Africa.

The man whose al-Qaida-inspired Signed in Blood Battalion led the attack on the In Amenas gas plant in Algeria, in which at least 38 people were killed, was considered a relatively unimportant figure in the political ecosystem of the vast region. But Belmokhtar, who fought for the mujahideen in Afghanistan and the Islamist GIA in the Algerian civil war before becoming a commander in the Mali-based al-Qaida in the Islamic Maghreb (AQIM), was ambitious.

In 2003 he masterminded the kidnapping of 32 European tourists whom he successfully ransomed. The money gave him the seed capital he needed to develop a sophisticated trading business throughout Saharan Africa, along the ancient 2,000-mile salt route used by the Tuareg tribesmen to transport goods from the continent’s west coast through to Timbuktu in Mali, then on to Niger before arriving in the Algerian south, gateway to the Mediterranean.

But while the Tuareg made their money in trading salt, gold and silk, Belmokhtar, who secured close links with the tribesmen through marriages to the daughters of several of their most prominent families, made a fortune through a different commodity: smuggled cigarettes. Such was the volume of his trade that he earned himself the sobriquet “Mr Marlboro”.

“He was not an important figure in AQIM, he was quite different from al-Qaida and Bin Laden,” said Morten Bøås, a senior research fellow at Oslo University and editor of African Guerrillas: Raging Against the Machine. “He is generally known as one of the more pragmatic figures, more interested in filling his own pockets than fighting jihad.”

The key role  cigarettes play in facilitating terrorism has been inexplicably ignored. But it has become of urgent interest to western intelligence agencies as they seek to check al-Qaida’s diverse factions operating across the Saharan region. 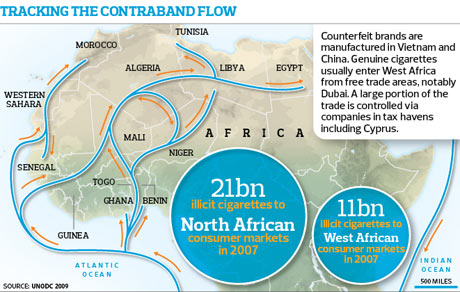 Indeed, after interviewing numerous agents and experts in the field, the International Consortium of Investigative Journalists (ICIJ) has concluded that “cigarette smuggling has provided the bulk of financing for AQIM”. AQIM’s affiliates include Ansar al-Sharia, an offshoot blamed for the killing of the American ambassador, Chris Stevens, in Benghazi, Libya, last year, and was thought to be behind threats last week that prompted the Foreign Office to urge Britons to leave the city.

The total value of the illicit tobacco trade in north Africa is thought to exceed $1bn (£632m). The United Nations Office on Drugs and Crime (UNODC) estimates that Africans smoke 400bn cigarettes a year, of which 60bn are bought on the black market.

However, five countries – Algeria, Egypt, Libya, Morocco and Tunisia – smoke 44% of Africa’s cigarettes, and their black markets are significantly larger. More than three-quarters of all cigarettes smoked in Libya, for example, are illicit.

Controlling the flow of contraband into these counties has triggered a turf war as Belmokhtar and other AQIM factions compete with each other, as well as with Tuareg tribes and corrupt army and government officials, in an attempt to “own” the trade. Some of the cigarettes transported across Saharan Africa are fakes produced in China and Vietnam. But most are genuine branded product, sourced through the Middle East and shipped through a multitude of countries via a Byzantine network of middle-men and companies, many in offshore tax havens.

The cigarettes often enter west Africa through Ghana, Benin and Togo. A second route is via Guinea, where the supply, according to UNODC, vastly exceeds the country’s demand. The cigarettes are then moved to Mali by road or by boat on the Niger river, where there is little risk of detection. A third distribution hub – for Senegal, Morocco and Algeria – is provided by Mauritania.

In each case, Mr Marlboro and AQIM clean up, either by charging a “tax” for the safe passage of the cigarettes along the salt route, or facilitating their transport, using 4x4s, trucks, motorcycles and even bicycles.

Often the smuggled products are not a premium western brand, such as Marlboro, but one of the cheaper, less prestigious marques that the tobacco giants are keen to introduce to developing nations as a way of gaining a foothold in their markets.

Inevitably, the endemic smuggling of cigarettes in such countries has raised questions about the role played by big tobacco, and in particular the extent to which it should be made responsible for distribution routes being used to fill the coffers of some of the most dangerous terrorist groups in the world.

Internal company memos show that in the 1980s British American Tobacco in Africa used a Liechtenstein-based company, Sorepex, as a key distributor. BAT documents reveal that the company saw Sorepex as a “gravy train” and a way of providing “cover, albeit increasingly flimsy, for BAT in some fairly shady business”. The company insists that it condemns all forms of smuggling.

In 2002, RJ Reynolds, owner of the Winston brand, was accused by the EU of selling its products in Iraq in breach of embargoes. The cigarettes were allegedly smuggled into the country by the PKK (Kurdish Workers’ party), named by the American government as a terrorist group. Documents allegedly revealed that the cigarettes were transported from the US and shipped to Spain and then to Cyprus and Turkey before arriving in Iraq. The case is currently before a federal appeal court in the US.

More recently, Japan Tobacco confirmed last year that it is being investigated by the EU amid claims it broke sanctions by shipping cigarettes to a firm linked to the Syrian regime. The company has denied any wrongdoing.

Experts say that the profits provided by cigarette smuggling fuel other criminal activities, including drug, oil and human trafficking, activities which often use the same distribution networks. But cigarettes remain the most profitable and least risky form of contraband. As Louise Shelley, a crime expert at Washington’s George Mason university, told the ICIJ: “No one thinks that cigarette smuggling is too serious, so law enforcement agencies don’t spend resources to go after it.”

This helps explain why terrorist groups exploit the illicit trade. According to the US Bureau of Alcohol, Tobacco, Firearms and Explosives, the IRA made as much as $100m between 1999 and 2004 by smuggling cigarettes into Northern Ireland. Hezbollah ran a successful smuggling operation in the US, shipping cigarettes from low-tax North Carolina to higher- tax Michigan.

“Tobacco smuggling is lucrative and widespread,” said Deborah Arnott, chief executive of the charity Action on Smoking and Health. “It helps to fund global terrorism and conflict, encourages corruption and remains a source of funds for some of the most repressive regimes in the world.”

Intelligence experts told the Observer that pushing illicit cigarettes into north Africa was at the “low end” of cigarette smuggling. The real money, they said, comes from shipping big-brand products back into Europe via Greece, Spain or sometimes Italy. So far, this is believed to be a small but growing market for the smugglers.

While there is no suggestion that the tobacco giants are actively working with terrorist groups, monitoring where their products end up is extremely difficult. The companies’ use of well-connected middlemen makes tracing their cigarettes almost impossible. Documents shared with the Observer by intelligence experts show how one middleman, who regularly buys product from a major tobacco company, has a complex operation involving offices, warehouses and bank accounts in Cyprus, Brussels, Dubai, Malaysia, Egypt, Israel, Uruguay, Panama and Singapore that allows him to move cigarettes around the world without being traced.

“Those providing ‘protection’ along the routes – often customs officers or security services, but in some instances ‘terrorists’ – make good money for little or no work,” said one intelligence expert who has worked in counter-smuggling operations. “What’s best for them is that the trade is either in US dollars or euros. It’s hard currency into clean accounts which they can then use at their leisure to buy whatever they need.”

Experts want countries to ratify the international treaty on the illicit trade in tobacco that would force cigarette companies to monitor and trace the distribution of their products while conducting due diligence on their customers.

“The only way you can effectively police this is if the manufacturers accept legal responsibility for their products all along the chain of supply – that will force them to deal with reputable agents,” said Eric LeGresley, a Canadian lawyer who has studied tobacco companies.

Ironically, Belmokhtar may have been too successful at smuggling cigarettes. It is rumoured that late last year he was forced out of AQIM and his base in Mali after the organisation’s leaders questioned his commitment to their cause. Mr Marlboro, they suggested, was more interested in money than ideals.

The slaughter in the Sahara may have been Belmokhtar’s grotesque attempt to prove them wrong, something that has huge consequences for his smuggling operations.

“His days as a smuggler are over,” Bøås predicted. “No bandits or traders will want to be within a kilometre of him now. They don’t want to be targeted by American drones.”

But, given the money at stake, there will be no shortage of others ready to take his place.

The Taliban Across the tribal belt of Pakistan, Taliban militias collect money from cigarette smugglers in exchange for allowing counterfeit Marlboro and cheap local brands into Afghanistan and China. Cigarettes have become an increasingly important source of financing for the groups, second only to the heroin trade, according to Pakistani intelligence officials.

The PKK Charges a fee for every container of cigarettes allowed to pass through its territory. Controlled the flow of contraband cigarettes into Iraq during the 1990s; now controls the flood of counterfeit cigarettes out of the same country.

Farc  The world’s largest supplier of cocaine often uses its well established drug smuggling routes to move American cigarettes according to evidence given to the US Senate.

The CNDP In 2008, the UN claimed that The Congres National Pour la Defense du Peuple, a Tutsi-backed rebel group accused of atrocities, was being funded by Tribert Rujugiro Ayabatwa, a tobacco tycoon who pleaded guilty to cigarette tax evasion charges in South Africa.

Sources: the International Consortium of Investigative Journalists, the United Nations Office on Drugs and Crime.