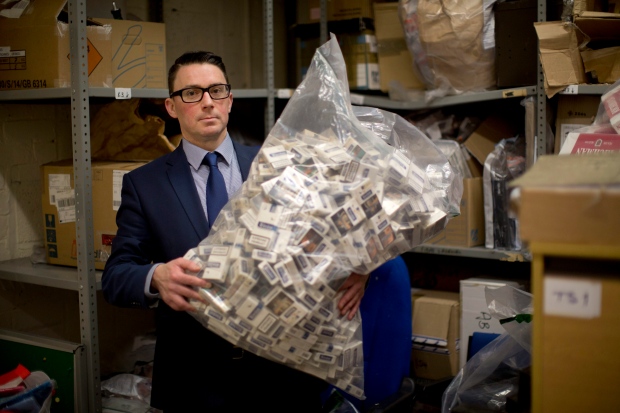 In this Tuesday, Feb. 21, 2017 photo, Matthew Cridland, the Trading Standards manager at Newport City Council, poses for photographs with a bag of illegal cigarettes at the Newport Civic Centre in Newport, south Wales. (AP Photo/Matt Dunham)

Annual trade in fake products was worth $461 billion in 2013, around 2.5 per cent of total global trade, according to Piotr Stryszowski, an economist with the Paris-based Organization for Economic Cooperation and Development. The money goes to organized crime, and helps fund terrorism and the trafficking of drugs, people, sex and wildlife, as well as the lavish lifestyles of its kingpins.

After an investigation by the ABF Tobacco Strike Team, prompted by intelligence received from the ACIC, ABF officers conducted warrant activity on 16 February 2017 at a warehouse in Thomastown where they found cigarettes concealed in metal gates.

Nitzana customs authorities find 200,000 NIS worth of tobacco hidden in pots imported by the Palestinian Authority. Israeli customs officials at the Nitzana crossing foiled an attempt to smuggle two tons of tobacco over the border, worth a total of 200,000 NIS and for which taxes would have been 1,000,000 NIS.

The tobacco was hidden in pots imported by the Palestinian Authority, which were labeled as holding ‘houseware.’

On Thursday, Feb. 23, Governor Sam Brownback and Attorney General Derek Schmidt announced that Kansas has negotiated an agreement with the Kickapoo Tribe in Kansas to improve accounting for cigarettes and tobacco products sold on tribal lands.

“This compact, if approved by the Legislature, will significantly improve cooperation between the tribe and the state to prevent the illicit shipment of untaxed and unaccounted-for cigarettes from other states for sale on qualified tribal lands in Kansas,” Schmidt said. “The compact will strengthen the state’s ability to comply with the terms of the 1998 Tobacco Master Settlement Agreement that governs cigarette sales in our state.”