The 100-year-old Ceylon Tobacco Company will be closing down two of its leaf depots as the company faces difficulties due to the steep increase in cigarette prices which drastically reduced consumption. The company issuing a statement said that in the first phase CTC will wind down operations in Anuradhapura and Sigiriya starting with the closure of the two leaf depots.

It highlighted that tobacco consumers had deviated from legal cigarettes to smuggled cigarettes and beedi, defeating the government’s major objectives of increasing taxes on tobacco such as improving public health and increasing revenue.

The chairman of the National Agency for Tax Administration (ANAF), Bogdan – Nicolae Stan, requested that an analysis of last year’s activity of the General Customs Directorate (DGV) and regional customs’ directions be carried out, in view of identifying the causes that have led to the increase in the illicit trade of cigarettes.

“Smuggled cigarettes bring major losses to the national economy, and the state consolidated budget is suffering. We will intensify the actions to combat illicit trade in cigarettes. Simultaneously, we will launch a check-up operation of all territorial customs offices, and we will take all necessary measures accordingly,” stated Bogdan – Nicolae Stan in a press release  on Monday.

Out of control smuggling has tobacco farmers worried (Vietnam)

VietNamNet Bridge – Farmer Nguyen Van Sau in the southern province of Tay Ninh’s Ben Cau District is relieved that it has been a profitable year for tobacco farmers, as the crop has fed his family and hundreds of others for decades. Illegal cigarettes are not controlled by Vietnamese law. — Photo mot.gov.vn Still, Sau and other farmers are increasingly concerned about the rapid increase in cigarette smuggling along Tay Ninh’s long border with Cambodia. “Smuggled cigarettes are bad for our business, and they lower our tobacco prices,” he told Viet Nam News. Pham Kien Nghiep, general secretary of the Viet Nam Tobacco Association (VAT), said the number of smugglers had risen greatly due to the huge profits. In fact, the smuggling of cigarettes in Viet Nam is far worse than most people realise. In a survey conducted in 2012 by the Oxford Economics Department and the US-based International Tax and Investment Centre, the country ranked second in Asia in the number of smuggled cigarettes.

MONEY UP IN SMOKE 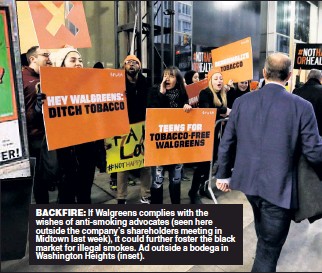 Cigarette sales in New York have become a burning issue on many fronts recently, with anti-smoking tax policies costing the state and city billions in lost tax revenue.

A recent study found that more than 50 percent of the cigarettes consumed in New York are smuggled in — the nation’s highest rate.

From: The Daily Caller | Opinion