From: The World Bank

Illicit trade in tobacco products undermines global tobacco prevention and control interventions, particularly with respect to tobacco tax policy. From a public health perspective, illicit trade weakens the effect of tobacco excise taxes on tobacco consumption – and consequently on preventable morbidity and mortality – by increasing the affordability, attractiveness, and/or availability of tobacco products. Furthermore, tobacco illicit trade often depends on and can contribute to weakened governance.

Almost five million cigarettes have been seized by police in an operation targeting loyalist paramilitaries.

The PSNI’s Paramilitary Crime Task Force seized the cigarettes and other goods, including tobacco, designer clothing, perfume and fireworks.

Searches on Friday centred on premises around Banbridge and Carryduff in County Down and Ballyclare, County Antrim.

The UK’s top 32 tax criminals of 2012 have been sentenced to a combined total of 155 years and 10 months behind bars, including a gang of seven men who smuggled more than 20 million cigarettes into the UK from Dubai and a London-based jeweller who evaded more than GBP 7 million VAT by smuggling gold bought in Dubai into the UK.

The jeweller, Chaudray Ali, was sentenced to nine years in prison. The gang of seven, which described over 20 million smuggled cigarettes on shipping documents as babies’ toys, received a collective sentence of 24 years and six months.

Wanted, playing dead or alive: the sniffer dog with a bounty on his head

Scamp the spaniel is so good at finding illegal tobacco, crime groups have offered a £25,000 reward for his capture 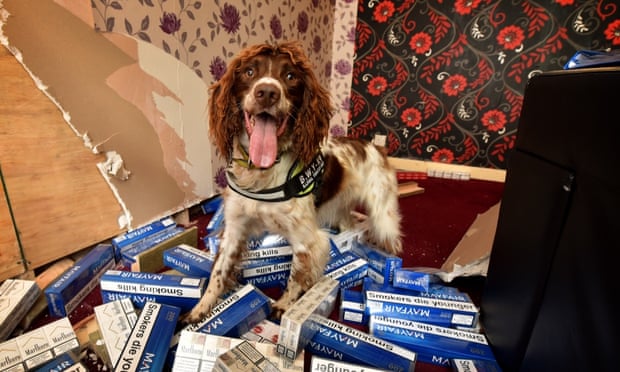 Of course. Spaniels are famously passionate about import duties. That’s not the only thing. Some smuggled cigarettes are counterfeit, bulked out with bits of rubbish including sawdust, dead insects and mouse droppings.