It was not unusual for cigarette smuggler Gary Thompson to saunter into banks several times a week and pay in cash sums of up to £20,000.

The former Cleveland Police officer had six different bank accounts, at least four aliases and was caught on camera many times paying in the proceeds of his scam.

“We filmed him under surveillance many times making trips to about three different banks, about four times a week and putting in handfuls of cash anywhere between £5,000 and £20,000.” 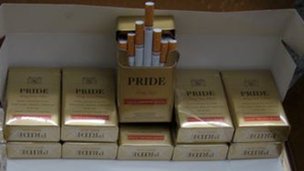 The scam began not long after Thompson gave up his job as a police constable with the Cleveland force in the spring of 2006, to become the director of a pet shop supply business.

Within weeks he was leading a double life running the cigarette smuggling operation.

HMRC said he officially claimed to be earning £170,000 a year, and bought four properties.

To carry out the scam, Thompson and his accomplices – former Cleveland Police PC Anthony Lamb from Coxhoe, pick-up driver David Lister, of Downham Market, Norfolk – would clone the identities of people and set up fake businesses to foil shipping agencies and the taxman.

They then rented out properties all over the North East where they installed phone and fax lines, as well as created false stationery and setting up fictitious email addresses.

David Lister, 49, would pick up the illegal shipments from Felixstowe and bring them to the North East and Yorkshire. 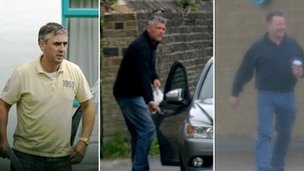 All of the shipments were from the Middle East and Far East, including Dubai and China, and involved brands such as Rocco and Pride.

The cigarettes were not fake, but made of low-grade tobacco – known as cheap whites – which had not gone through the usual quality checks.

A packet of 20 would cost about £3.40 – about half the normal price and would end up being sold from people’s house, social clubs or even wholesalers.

A team of about 30 HMRC officers have spent hundreds of hours on the case, keeping the gang under surveillance and chasing paper trails.

The cigarettes were never hidden.

They were put into sealed containers in their millions and shipped to the UK “masquerading” as mundane deliveries such as ceramic pots, dog crates and garden planters.

With his police experience he knew what paperwork was needed to make a false identity seem legal. 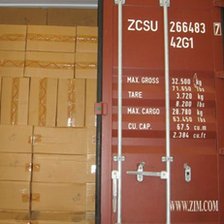 The low quality cigarettes were smuggled in their millions

“It must have been exhausting and laborious from day to day trying to remember what name or alias they were using at any given time – often the names were made up or they were the identities of real people.

“It is also not a cheap business to run with cash needed up front to pay shipping firms and drivers. It also involved a lot of planning with lots of meetings in lay-bys, car parks and service stations.”

During the four years the scam ran, HMRC estimated the men flooded the UK with 60 million illegal cigarettes evading at least £11m in tax duty.

The smuggling ring was uncovered in November 2011 when Customs officials did a spot-check and uncovered a haul of cigarettes at Felixstowe.

Ms Potts added: “Our message to smugglers is that no matter how complicated the paper trail is we will unravel it.

“These men took the risk of being caught because they knew that there were huge profits to be made and there is a big market for cheap cigarettes.

“As former police officers they knew the law and what they were doing was wrong and had the knowledge to make the business appear legal.”