Stop—a ban on menthol cigarettes—in the name of the law!

A number of current and former top-ranking law enforcement officials from the tobacco-producing South have blasted a potential menthol cigarette ban as the Food and Drug Administration weighs restrictions on those products, contending that prohibition will spur smuggling, counterfeit cigs and other organized crime.

Their comments to the FDA mirror arguments being made by Big Tobacco companies that have cited the specter of a menthol black market.

But tobacco critics and a former top New York state tax official scoffed at those claims, and accused tobacco companies of scare tactics that divert attention from the health damage caused by menthol cigs.

The FDA on Tuesday granted a 60-day extension to the time for public comments on possible menthol regulations. That extension until Nov. 22 came after requests from Big Tobacco companies, including Lorillard—whose Newport menthol brand accounted for 88 percent of the company’s sales last year, and which is the second-biggest selling U.S. cigarette.

The FDA’s move toward potential regulations comes after a recent agency study found that menthol cigarettes may “pose a public health risk above that seen with non-menthol cigarettes.” The cigarettes, whose flavoring reduces the harshness of smoke, appear to be more addictive than unflavored cigarettes, the study indicated. Menthol cigarettes also are particularly popular with young smokers and African-Americans.

“The contraband market would thrive under a ban, and would increase criminal activity, including activities by organized crime and terrorist groups,” wrote Paul Carey III, chief of enforcement for the Northern Virginia Cigarette Tax Board, in a letter submitted to the FDA’s online comments section. Carey told CNBC.com that cigarette smuggling is an ongoing problem and linked to violent crime in his jurisdiction.

The black market concerns of those Southern-based law enforcement officials, both past and present, are being raised three years after similar arguments were made by other law enforcement groups to the FDA’s Tobacco Products Scientific Advisory Committee, which is tasked with examining the public-health consequences of menthol cigarettes.

Back then, those concerns were raised by the 40,000-member National Troopers Coalition, an advocacy group for state troopers and highway patrol officers, as well as the National Organization of Black Law Enforcement Executives, which warned that a menthol ban “would create flourishing criminal enterprises” 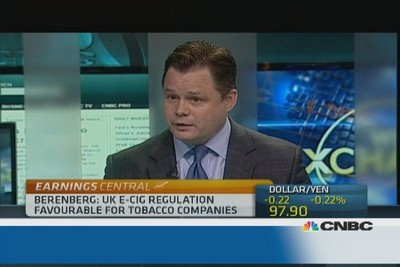 “If you want to preserve the demand for something, all you’ve got to do is outlaw it,” ex-Stokes County (N.C.) Sheriff William “Wic” Southern said when asked why he recently posted a comment opposing a menthol ban on the grounds of black market fears. “I just look at it as another substance like methamphetamine or crack. They’re very much available and people know where to acquire them.”

Southern’s grandfather was former U.S. Rep. Ralph Scott, who represented the North Carolina district that includes tobacco giant R.J. Reynolds’ headquarters in Winston-Salem. He said that ever since the U.S. Surgeon General warned that cigarettes caused cancer in 1964, when his grandfather was in Congress, “I’ve sort of seen the government is kind of intruding on the tobacco industry and I see this as just another step in the direction of outlawing tobacco, period.”

“Being from North Carolina, I’m sort of protective about the tobacco industry,” he said.

Southern and the two other law-enforcement veterans who responded to calls from CNBC all said they were asked by someone else to write their menthol ban-opposing comments. But they all noted that they did so because they believed there was a risk of fueling a black market.

Southern said he was asked by an acquaintance who is a lobbyist in Washington, whom he assumes is connected with the tobacco business. Carey was approached by someone in the tobacco wholesale business in Northern Virginia who asked him to look at the issue, and “they said if you’re willing to write a letter, please do.”

G. Allen Smith, chief of the Atlantic Beach (N.C.) police, said his comments opposing a ban were originally in a letter he wrote earlier this year to a state senator at the request of a professional police organization. Smith’s comments then were posted by someone else to the FDA site, after the group called him back and asked if his opinion remained the same, he said.

Smith said he had no objections to his comments being submitted to the FDA, which he was unaware of until CNBC informed him. He also said, “let me be clear, I’m against all of it,” referring to people smoking cigarettes. “But I don’t want to exacerbate a problem, that may already exist, if it may cause a black market issue,” he said.

Reynolds spokesman David Howard said, “I am not aware of any such request coming from us”‘ that law enforcement officials write to the FDA with concerns about a menthol ban. But, he noted, “We certainly have raised that point and believe there is legitimacy to” claims that a ban would spur a black market.

David Sylvia, spokesman for Altria Group, whose Phillip Morris division is the leading U.S. cigarette seller, said he was not aware of any coordinated effort to get law enforcement to speak against the ban.

Lorillard spokesman Bob Bannon said, “Lorillard has taken vigorous steps to communicate with all who will listen to our point of view, as we believe it is important for the FDA to hear from as wide an audience as possible on the topic of menthol.”

“We and others are determined to ensure that the FDA follows sound science in its evaluation and also understands the negative consequences of differential regulation of menthol cigarettes,” Bannon said.

Thomas Stanton, who previously headed cigarette interdiction efforts for the New York State Department of Taxation and Finance, said that both Big Tobacco and the law enforcement officials who oppose a menthol ban because of black market concerns “have no idea what they’re talking about.”

“All I can say is, they’re not very bright,” Stanton said. “The ban on them, menthols, is not going to do a damn thing.”

Stanton said that if there were a ban on menthol cigarettes, it would make it effectively impossible for smuggled menthols to be sold in conventional retail settings because they would be, by definition, illegal to be sold.

That would contrast with the current black market, where legal cigarettes bought in lower-taxed jurisdictions are smuggled to high-tax jurisdictions such as New York City and sold openly in bodegas and other stores, Stanton noted.

Peter Hamm, spokesman for the Campaign for Tobacco-Free Kids, said the law enforcement officials who wrote comments to the FDA should be asked if they “think that heroin and yellowcake uranium should be legal because in the absence of them being legal it leads to a black market.”

“That is really the logical flack in the whole counterfeiting and smuggling argument … It’s an industry-generated farce,” said Hamm, whose group supports an outright menthol ban on health grounds.

Like Stanton, Hamm said a ban would make it difficult, it not completely impossible, to sell illegal menthol cigarettes out in the open in stores, which are the primary distribution point for cigarettes.