“For decades before the creation of the Consumer Financial Protection Bureau, consumers were the orphans in a federal regime set up to regulate financial institutions. Anyone with a credit card might remember the consequences.

Banks were allowed to raise credit card interest rates on existing balances at any time for any reason. Regulators did nothing to stop it until 2008. Charging sky-high fees when a consumer missed a payment deadline even by a few minutes? Also fine with regulators. Explaining the rules in language so incomprehensible that a financial wizard would be hard-pressed to figure them out? Ditto.

The full list is much longer, including a major contribution to the ruinous financial crisis of 2008, which was triggered by outrageous mortgage lending practices that never should have been permitted. You might remember the lenders’ TV commercials: No income? No assets? No problem.

A splintered collection of regulators just stood by and watched.”

USA Today seems to be conflating the CARD Act (which imposes pricing and other restrictions on card lenders) with Dodd-Frank (which authorizes the CFPB), but let’s pretend the paper knows what it’s talking about, anyway. It’s still wrong. If, before the creation of the CFPB, the problem with federal oversight of financial services was that it consisted of a “splintered collection of regulators,” then how does it make sense to splinter that collection further by adding a new agency? It doesn’t.

And prior to Dodd-Frank, banking consumers weren’t regulatory “orphans.” In theory, consumers had all sorts of government guardians who were supposedly keeping them safe: The OCC, the Fed, the FDIC, the OTS, state attorneys general … I’ll stop there. And yet every one of these regulators fell down on the job. They all totally missed the financial industry’s greatest screw-up in a generation: The residential mortgage mess. Why anyone thinks the CFPB wouldn’t have missed it, too, is beyond me.

The mistake that boosters of the CFPB, such as USA Today’s editorial board, consistently make is that they assume that a change in regulatory structure — the creation of a new agency, say — must always improve regulatory effectiveness. But it won’t. Sometimes (or probably) it will reduce effectiveness by adding unneeded complexity and intra-agency turf-protecting. Have you seen the post-Dodd-Frank regulatory schematic Jamie Dimon included in several of his presentations over the past year? Take a look: 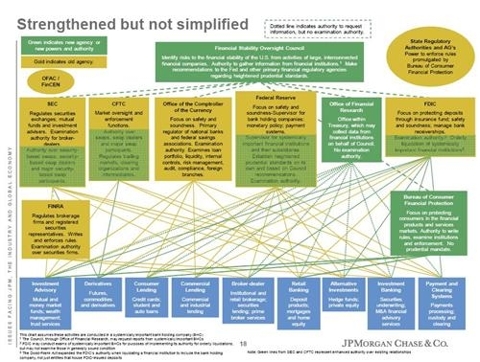 You don’t have to be a crazy conservative type like me to have serious doubts that a regulatory structure that convoluted is going to do an optimal job of safeguarding the financial system, protecting consumers, or both.

More likely, regulatory complexity and overreach often has the opposite effect it was supposed to. We’ve already seen how four regulators simultaneously let the mortgage crackup happen. And go back to the CARD Act for a moment, which the USA Today editorialists seem to think has been such a boon to consumers. Since the act was passed, average interest rates on credit cards have gone up, rewards programs have become stingier, and credit availability has shrunk in general. How’s that supposed to be good? Once the CFPB is up and running, you can count on the fact that it will have a similar effect on all kinds of consumer lending, from cards to auto lending to home mortgages. Wonderful.

Overall, the new regulatory system is going to be too complex and too intrusive at the same time. Likely result: It will do an even worse job at preventing disaster when the next crisis happens.