The last-minute rush to regulate

Agencies rush to issue regulations at the end of the administration primarily for two reasons: to avoid delays and to avoid scrutiny. The change in the administration and the often-lengthy confirmation process for new agency heads that follows can disrupt agencies’ operations and delay regulations. Consequently, agencies try to get their regulations out before the outgoing administration leaves office. Alternatively, agencies may deliberately hold off on finalizing controversial regulations until the midnight period when they face few political repercussions and little oversight.

Midnight Regulations and the Decrease of OIRA Staff

Every four years, the number of new federal regulations surges during the “midnight” period between presidential election day and Inauguration Day. This surge is seen when an incumbent president is reelected; however, it is considerably higher when there is a change in administration. Freed from many of the normal political constraints, administrations use the midnight period to enact sweeping and controversial regulations. Once finalized, regulations are difficult to repeal. 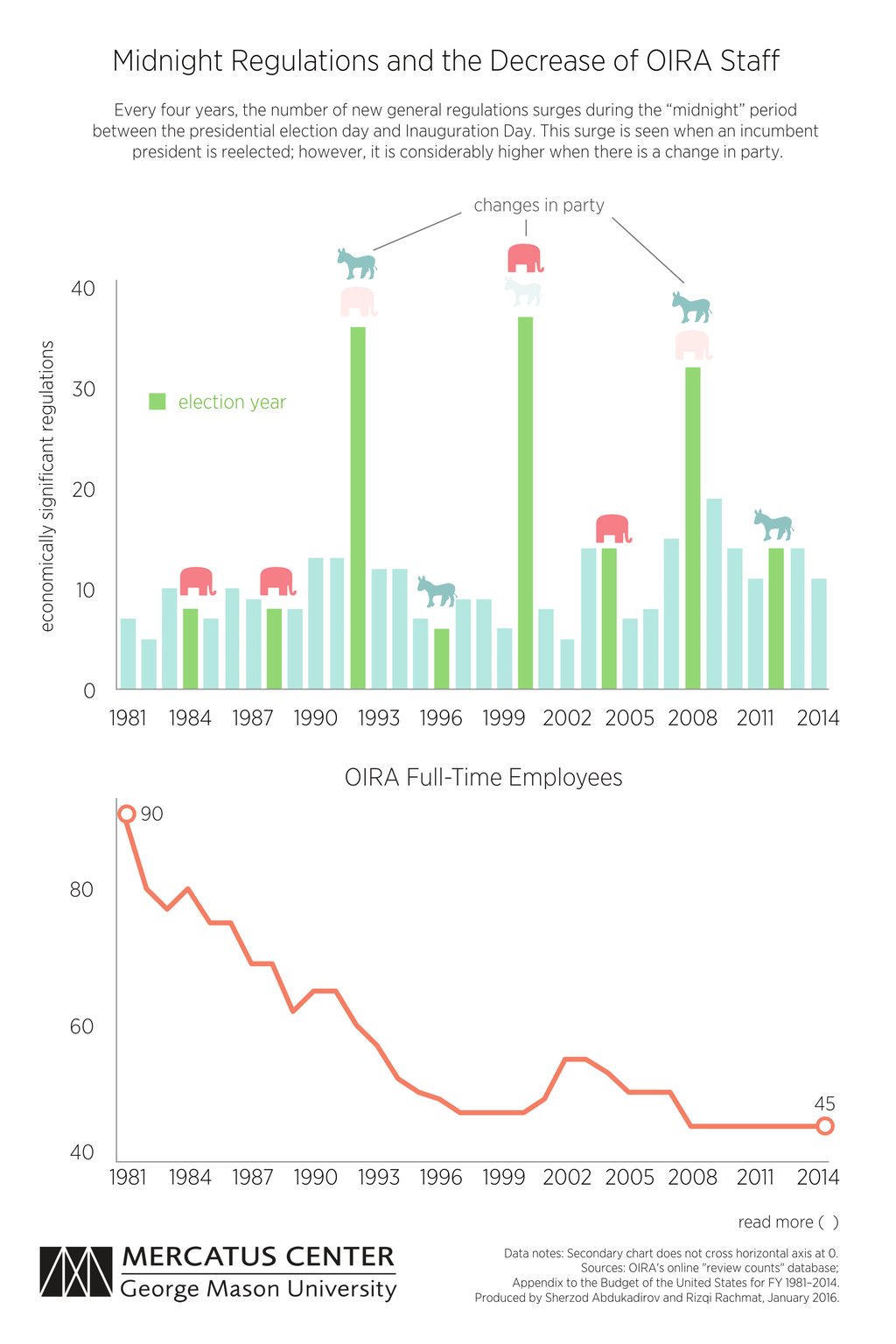 Taking the Time Needed to Get Regulations Right

A little-known White House agency, set up during the Reagan administration, is under fire after a new report claimed it has been responsible for delaying or killing regulations that could save hundreds of lives. However, supporters say it is doing the “cold-blooded” — but vital — work that has to be done in scrutinizing regulations.

“The piece in question portrays a distorted view of the Office of Information and Regulatory Affairs,” Emily Cain, a spokeswoman for the Office of Management and Budget, told FoxNews.com.

AT Kearney has produced the following chart:

WLF Comments to the FDA: Revision of the Nutrition and Supplemental Facts Label

Editor’s Note: The Washington Legal Foundation’s complete Comments to the FDA on its proposal that would mandate including “added sugars” on the Nutrition Fact Panel (Docket FDA-2012-N-1210) is available here. Below is a brief excerpt.

From: The Washington Legal Foundation

Washington Legal Foundation (WLF) appreciates the opportunity to submit these comments in response to the public notices published at 80 Fed. Reg. 44302 (July 27, 2015) and 80 Fed. Reg. 44303 (July 27, 2015). After detailing the interests of WLF in these proposed regulations, we will explain the serious constitutional concerns we have with the added-sugars labeling mandate and the Percent Daily Value labeling mandate. This comment will also explain why the Food and Drug Administration’s failure to comply with certain mandatory procedural requirements, and its flawed reliance on a federal nutrition advisory committee report, are legally suspect.

The Lobbying You Have Never Heard Of: Targeting the US President’s Office of Information and Regulatory Affairs

Lobbying has become a pervasive part of American politics with hundreds of organizations lobbying bills across thousands of issues. But, write Simon F. Haeder and Susan Webb Yackee, legislative lobbying is only half the story. In new research, they look at the lobbying of federal rulemaking agencies, such as the President’s Office of Information and Regulatory Affairs (OIRA). They find that despite a lack of media coverage, intense lobbying of OIRA occurs, as evidenced by the often substantive changes in OIRA’s final rules compared to the draft rules submitted for review.

Summary:  To date, Federal agencies have completed over 179 retrospective initiatives which are expected to yield $22 billion in savings over the next five years.

As one example of our new retrospective review efforts going forward, today I join Anne Rung, the Administrator of the Office of Federal Procurement Policy, and Dave Mader, the Controller of the Office of Management and Budget in an initiative to review government regulation of university research and reduce unnecessary burdens on universities in their management and compliance with Federal contracts, grants, and other awards. It has become clear that universities face many regulatory compliance burdens that shift resources away from core research and education missions. Removing any such burdens that are unnecessary puts money where it benefits society the most, and to that end I am pleased to announce our request for burden reduction suggestions through the ongoing National Dialogue at www.cao.gov.

We accept anonymous replies and there is no need to disclose your email address–notwithstanding any requests to do so.

(1) See the space provided below: “Leave a Reply”

The State of the Art of Regulatory Reform in the US: The OMB 2014 Report

The Regulatory Right-to-Know Act calls for the Office of Management and Budget (OMB) to submit to the US Congress each year “an accounting statement and associated report” including: (A) an estimate of the total annual benefits and costs (including quantifiable and nonquantifiable effects) of Federal rules and paperwork; (B) an analysis of impacts of Federal regulation on State, local, and tribal government, small business, wages, and economic growth; and (C) recommendations for reform.