Listen to the Story 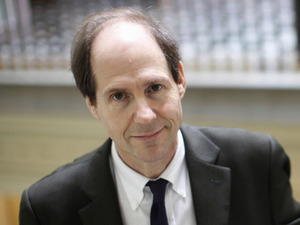 Cass Sunstein is the director of the Office of Information and Regulatory Affairs. A new study finds that the office has altered more federal regulations under President Obama than it did under George W. Bush. 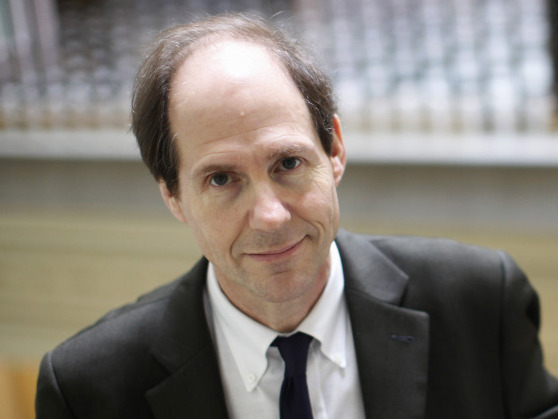 Cass Sunstein is the director of the Office of Information and Regulatory Affairs. A new study finds that the office has altered more federal regulations under President Obama than it did under George W. Bush.

text size A A A

Tucked away in a corner of the White House's Old Executive Office Building, an office that most people have never heard of affects millions of Americans' lives. It's the last hurdle that every proposed regulation must surmount before seeing the light of day. And a new study of this obscure part of the government suggests that President Obama is altering more of those regulations than President George W. Bush did.

Health and safety regulations are not born fully formed. They have to run a long marathon first. Once an agency devises a rule proposal, whether to regulate air pollution or food safety, scientists and lawyers study the impact and cost of the rule. Agencies gather public comments. After a process that may take years, the regulation goes through one last gantlet in a place called OIRA (pronounced "oh-EYE-ra").

OIRA stands for the Office of Information and Regulatory Affairs. It's part of the White House office that manages the entire federal budget. Michael Fitzpatrick has worked there for three years, in an office taller than it is wide. His window looks out over the White House's West Wing.

"In all of our lives, we have others review our work and make sure we're doing it as well as possible. And that's the way I view OIRA's role," he said in an interview with NPR.

He compares his role to that of an editor — looking at every proposed rule and asking, "Are you achieving this regulatory objective in the smartest, most effective, most efficient way possible?"

A 'Killing Ground' For Protective Rules?

The outcome, according to a new study by the Center for Progressive Reform, is that the office "has served as a killing ground for protective rules."

"We studied the records of 1,080 meetings that have been held at OIRA over the last 10 years," said Rena Steinzor, CPR's president. "And we found that OIRA has changed 84 percent of environmental regulations, and 65 percent of other agencies' regulations, and the change rate is worse than it was under George W. Bush."

In other words, her group argues, this president is watering down or undoing a greater percentage of proposed regulations than his predecessor did.

Fitzpatrick, who sits at the center of this debate, argues that his office is improving regulations, not gutting them.

"When you are dealing with the most complex questions of policy, it's to be expected that there are going to be questions raised and insights gleaned that cause an agency to say, 'You know what? We should make a change here or there. We can do this in an even better way.' "

While the rest of the public might not know about OIRA, lobbyists have the office on speed dial. Industry groups visit OIRA largely for one purpose: to reduce regulation. Steinzor's analysis found that industry representatives outnumber public health and safety advocates by almost 4 to 1 at OIRA meetings.

Jim Tozzi helped create OIRA and worked on regulations under five presidents. He says the tilt toward industry is to be expected.

Regulations, he says, "increase the cost of industry. So they have more direct skin in the game." In contrast, he says, environmental groups' members "don't have skin in the game, because they just say 'they'll cough their lungs out' or something like that."

Besides, Tozzi says, "If they meet with you more, it doesn't mean they're going to agree with you." OIRA has an open-door policy of never turning down a meeting with anyone.

Despite these figures suggesting that the Obama White House is altering more regulations than Bush and meeting with industry far more than with public safety advocates, Republicans accuse President Obama of choking the economy with a glut of "job-killing regulations." Some of that complaint has to do with health care and financial reform — two big laws that include a lot of regulations.

Obama always emphasizes the need to strike a balance, saying rules that don't make sense should die, while others are important.

"I reject the argument that says for the economy to grow we have to roll back protections that ban hidden fees by credit card companies or rules that keep our kids from being exposed to mercury. Or laws that prevent the health care industry from short-changing patients," he said in a September speech to Congress.

People who have spent their careers in this field are not surprised to learn that the Obama White House is changing more draft rules than the Bush White House did.

John Graham ran the regulatory oversight office under George W. Bush. In his experience, Republican presidents tend to put people who don't like new rules in charge of agencies — so those agencies don't send a lot of regulations to a Republican-led White House for review.

In fact, "we had to devise an entirely new device called the prompt letter," Graham recalls. "It says, 'You really ought to strengthen the food label by putting the trans-fat content of foods on the label.' But I think what you'll find in the Obama administration is that there are no shortages of ideas of new regulations to be adopted coming out of the agencies."

While OIRA staffers try to evaluate those ideas based on the merits of each proposal, many people who've worked there in the past say sometimes raw politics comes into play.

Susan Dudley, who worked at OIRA in the Reagan administration and came back to run the office at the end of the George W. Bush administration, recalls a former office head telling her, "Sometimes you have to kiss a pig." That is to say, "Sometimes politics wins the day."

Therefore, the person who runs OIRA is tremendously important. If he or she has the president's ear, OIRA can win arguments at the White House. Otherwise the office can easily be bulldozed by other senior advisers.

The man who runs OIRA today is a legal superstar named Cass Sunstein, who is close friends with President Obama. They taught at the University of Chicago Law School together. People say half-jokingly that Sunstein could have had any job in the federal government, and he chose to run OIRA.

Sunstein's deputy, Mike Fitzpatrick, acknowledges that senior White House officials sometimes have their say. But he cautions that politics is not always a dirty word.

"I know that there have been times through all administrations of both parties that at the end of the day, in a particularly complex, tough situation, the president or his senior advisers have said, 'You know what? I don't want to do this right now.' And frankly, that's why we have national elections."

Ultimately, one of OIRA's main jobs is to put a dollar value on things that nobody wants to price. The office must ask how much money the country is willing to spend to save an endangered species, or what cost the country is willing to inflict on companies in order to provide veterans in wheelchairs access to restrooms. These are questions that nobody is comfortable asking. So perhaps it should be no surprise that few people are happy with OIRA's answers.

Thousands Flood D.C. For 'Take Back The Capitol'

Unions Push For Protests Throughout D.C.

With the Iowa caucuses just weeks away, Gingrich has very little time to raise the money he needs.

Discussions for this story are now closed. Please see the Community FAQ for more information.

It's All Politics: Political news and analysis from NPR in the nation's capital.

NPR thanks our sponsors

NPR tracks significant events and developments in the Obama administration.

NPR political analysts Ken Rudin and Ron Elving delve into the week's political news and analysis in a weekly podcast.

From the Associated Press

Weekends On All Things Considered Podcast

Missed All Things Considered this weekend? Here's the best of what you might've missed.